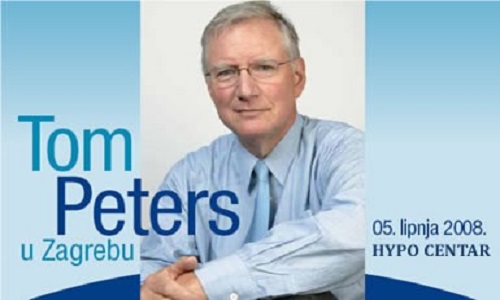 Adria Business Forum was held on June 05th 2008 in front of about 1000 businessmen in the hall of Hypo Centre in Zagreb.

Adria Business Forum was held on June 05th 2008 in front of about 1000 businessmen in the hall of Hypo Centre in Zagreb.

The keynote speaker was one of the world’s most famous experts in management and business excellence, American Tom Peters.

The conference theme was Leadership & Business Excellence, which is the area where Peters deeply influenced global management practice.

So his book „In Search of Excellence“ is considered one of the most influential books ever written about management. It is based on 43 studies of exemplary American companies from various industries outlined eight basic principles of management, which in his view make the company successful.

Exposure to these eight principles comprised the backbone of Peter’s presentation to members of the business elite from Croatia and the region, students of economics and business schools, university professors, journalists and other interested.

These eight principles of success of companies that Peters called timeless were: readiness for action and change, closer to customer needs, encouraging innovation and creativity of employees behaviour toward employees with respect and dignity.

For success, according to Peters’s opinion, should still maintain a distinctive corporate culture, to do what the company is better than the other, have a simple organizational structure, centralize strategic and financial control and decentralize authority.

After the lecture on business excellence program there was a round table about the excellence in South Eastern Europe, and the evening banquet for 30 the most prominent Croatian managers.